The Stages of Housebreaking a Puppy

Q: I am having problems with my dog and hope you can help. My dog is a one-year-old, male mixed-breed. He has been crate trained since we adopted him at the age of about 7 months. He is usually in his kennel at night and when we leave during the day. Due to some changes, I will be returning to work full-time outside the home.

I don’t want my dog to spend the majority of his life in a kennel because I need to leave for work 5 days per week. Lately, we have been leaving him loose in the house when we depart. We were increasing the time each day. He did well for the first few days. However, now, every time we return, we find that he has peed, pooped or done both inside the house.

I always make sure he goes out before we leave. He has his kennel open to him. I leave the TV on. I leave toys inside his open kennel. He never has housebreaking accidents when we are home. So, I don’t know whether the issue is his house training or something else. How can we get him to a point where we can leave him loose and not return to a home soiled by urine or feces?

A: Most likely, your dog is still only in stage one or is in the early days of stage two of housebreaking. If you are home, your dog will communicate a need to go outside. When you are not home and he is inside his crate, he perceives his crate as a den. Therefore, he will wait until you return home, rather than suffer the inconvenience and discomfort of soiling his crate. However, he does not yet perceive the whole house as his den. Consequently, when you leave him loose, he soils your home.

The problem you are encountering is due to moving too fast in expanding his freedom from the crate to your entire home, with no increments in-between. Although you adjusted the time he remained free, you did not incrementally adjust his physical “den space” during the times that he remained free. Consequently, because your dog is still only in stage one or has only recently entered stage two, he values immediate comfort.

How Do I Housebreak My Puppy?

Puppy housebreaking is a multi-step process. Before stage one, the dog routinely goes to the bathroom whenever they feel uncomfortable, wherever they are and regardless of whether they are indoors or outdoors.

As a dog progresses into stage one of housebreaking, they develop a preference for going outdoors, but will still go indoors provided a human is not conveniently nearby to receive communication or open a door. When you are unavailable due to work or other responsibilities, keep your dog in a secured crate. This will deter your dog from urinating in the house when you can't take them outside, and it will encourage them to wait until they can go outside.

Make sure the crate is void of extra space so your dog doesn't think it's acceptable to urinate in one corner of the crate and sleep in another corner. Dogs are unlikely to soil their sleeping space because they instinctively like to be clean, so a small space will prevent your dog from relieving themself while crated. The crate should be large enough that your dog can comfortably sit and sleep in the crate but also small enough that they don't have too much room.

When your dog whines or scratches in their crate, quickly respond by taking them outside because they are most likely communicating that they need to relieve themself. You should also create a housebreaking schedule and stick to it. You should take your dog outside at the following times:

During stage one, you should also praise your dog for positive habits to reinforce that behavior. When your dog successfully urinates or defecates outside, praise them and maybe even give them a small treat. If they don't relieve themself within five minutes, return them to their crate and try again later. If your dog does relieve themself, reward them with outdoor or indoor playtime.

Positive reinforcement for good behavior — providing treats or toys for alerting you to their need to go outside — is the best way to housetrain a dog. If you scold them for peeing or pooping inside, they may develop a fear of relieving themselves in front of you, exacerbating the problem.

During stage two of housebreaking, a dog develops the mindset of “outdoors good, indoors bad.” During this stage, you can move your dog from a crate to a gated room or tether them within a room. Compartmentalize your home with baby gates and expand your dog's “den territory” slowly as he demonstrates responsible behavior. Baby gates are also great tools to keep your dog safe from hazards such as Christmas trees or other plants you may have in your home.

If stage one was successful and your dog remains in their space accident-free for seven consecutive days, you can expand their area to include an extra room. They must be separate from any other dogs during this time.

For instance, you can confine your dog to the room of your home where you keep their crate. When they can go one week without an accident in that area, add a hallway or a contiguous room. Gradually and incrementally expand his baby-gated territory room by room until they can responsibly remain loose within your entire home.

At the stage two completion of housebreaking, a dog is reliably housebroken. The dog finds going indoors repulsive and will wait many hours for an opportunity to go outside. You can have peace of mind knowing that your dog will wait until you can take them outside and that they will let you know when they need to relieve themself.

Housebreak Your Puppy With Quality Treats

Housebreaking a puppy can be challenging, but with the right methods, you can find success. When you housebreak your four-legged family member, it's important to reward them for positive habits. Browse Loving Pet's selection of quality training treats to start training your pup today. 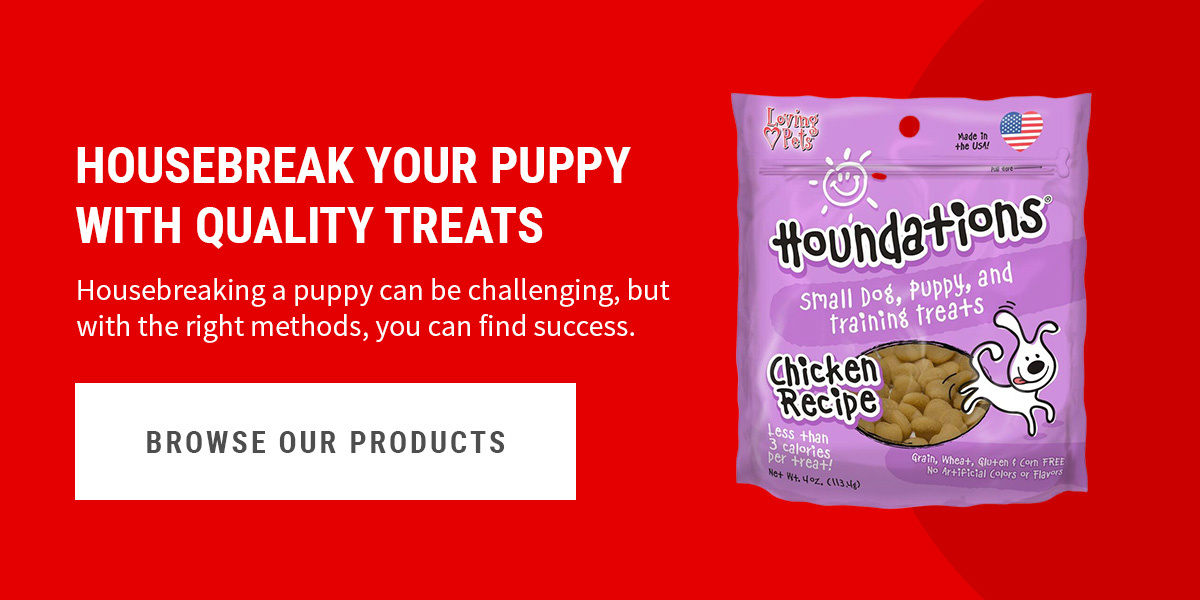 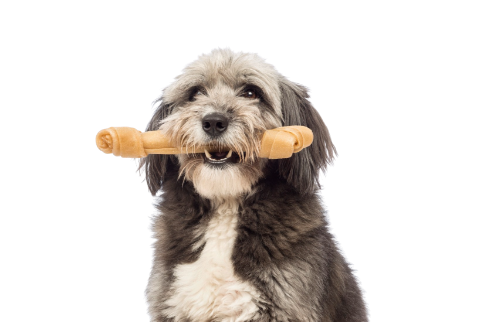